As of 1 July 2019, the MLA Job List has a new interface. It provides no way to search or mark positions by date of publication, which will make keeping an ongoing tally much more difficult. Since it is fair to describe all the dynamics described on this page as static or declining, I see no good reason to keep updating it.

This page began as a simple test of a prediction made by William Pannapacker in a 2012 Chronicle of Higher Education column titled “‘No DH, No Interview’.” Take its final form as a slightly broader yet still blunt and informal test of generalizing claims for “digital humanities” as a growth area within Pannapacker’s own main scholarly discipline, English studies (which is also my own).

Within the domain of the discipline of English studies in the United States as represented by the Modern Language Association of America, the discipline’s main organization, there are two indicators.

1. “Digital Humanities” in the MLA JIL

“MLA JIL” is the Job Information List of the Modern Language Association of America.

The number of jobs advertised annually in the MLA JIL for scholars whose primary specialty or other professional identification is “digital humanities” is close to zero. The phrase “digital humanities” does appear somewhat more often as an identifier of a desired subfield or supplementary specialty. Still, the proportion of the latter — that is, of job advertisements in the MLA JIL in which the phrase “digital humanities” appears in any way at all, even as one of many possible, non-required, even non-preferred subfield or subdisciplinary interests — has yet to exceed 6% of the total number of advertisements annually.

This answers Pannapacker’s pronouncement directly. Under the circumstances, a five to six per cent advantage, in the non-possible best case (that is, a case in which one is qualified for every position that includes the phrase “digital humanities”) is without meaning. If you can’t justify your interests except through fables of market demand that collapse in the face of simple counting, then you’re doing it wrong.

2. “Digital Humanities” at the MLA convention

“MLA convention” is the annual convention of the Modern Language Association of America.

Mark Sample’s data for 2009–2015 (after that line headed downward in 2015, Sample ceased publishing his annual celebrations): 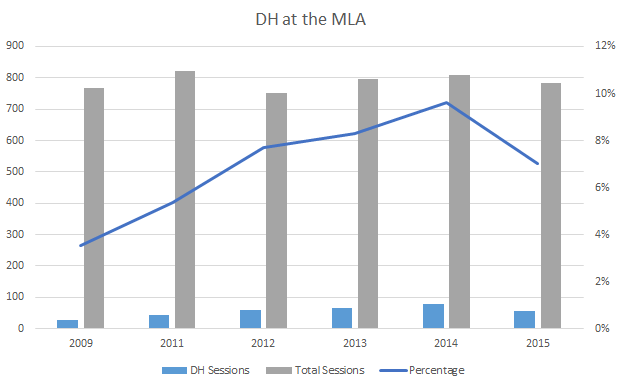 “Day of DH” is an annual one-day participatory celebration facilitated by member registration and blogging on a designated web site. Every Day of DH site since 2012 has reported a total number of registrants.

Add data on DH-devoted conference attendance, starting with Scott Weingart’s data for 2017 and his preliminary conclusion that “the DH Hype Machine might be cooling somewhat, after five years of rapid growth.”